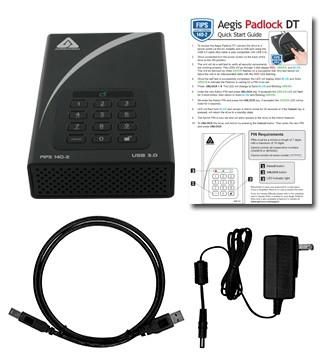 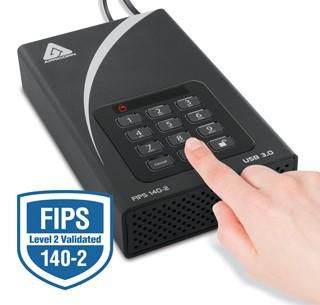 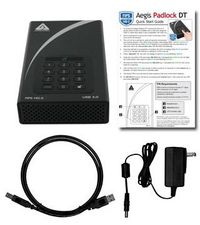 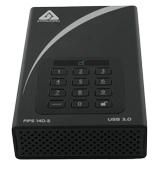 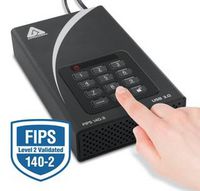 Apart from setting up a password on your desktop and a perhaps a firewall, we often don't consider the security of the files on our desktop machines. Information such as customer files, credit card information or proprietary company data should be kept secure, but should be easy to access by authorized personn...

Apart from setting up a password on your desktop and a perhaps a firewall, we often don't consider the security of the files on our desktop machines. Information such as customer files, credit card information or proprietary company data should be kept secure, but should be easy to access by authorized personnel. Enter the Aegis Padlock DT FIPS, designed specifically for desktop systems, this high capacity desktop external drive has everything you need to keep you files secure.

Super fast USB 3.0 Connection – Data transfer speeds up to 10X faster than USB 2.0
With a super speed USB 3.0 interface, you can now access your files faster than ever before. The Aegis Padlock DT FIPS is also backwards compatible with USB 2.0 and 1.1 ports.

Drive Reset Feature
The Aegis Padlock DT also employs a useful drive reset feature, which can be implemented with a unique command. This clears all PINs and data, and creates a new randomly generated encryption key, enabling the drive to be reset and redeployed as many times as needed.

Auto-lock Feature
The unattended Aegis Padlock DT can be configured to lock after a pre-determined amount of inactivity time of your choosing. Ideal for protecting your data when you’re away from your desk.

Lock Slot for Additional Security
Compatible with most standard security locks, the Aegis Padlock DT’s lock slot enables the drive to be secured to your desk or other permanent fixture for an added layer of physical security.

Data at Rest Protection
All data, PINs, and encryption keys are always encrypted while at rest.

Brute Force Self Destruct Feature
The Aegis Padlock DT FIPS uses a three pronged approach to protect against a Brute Force attack. The first step is to deny access to the drive until the drive can verify the user PIN. After several incorrect attempts the drive will lock itself, requiring the drive to be plugged in again to input a PIN. This feature blocks automated attempts to enter PIN numbers. Lastly, after a predetermined number of failed PIN entries, the Padlock DT assumes it is being attacked and will destroy the encryption key and lock itself, rendering the data useless and requiring a total reset to redeploy the Aegis Padlock DT FIPS.

Sealed from Physical Attacks by Tough Epoxy Coating
In addition to encrypting all of the PINs, data and the encryption key itself, the Aegis Padlock DT FIPS adds another barrier between a between your data and a hacker. The encryption chip and circuitry of the Aegis Padlock DT are completely protected by a super tough epoxy compound, which is virtually impossible to remove without causing permanent damage to the electronics. This barrier prevents a potential hacker from accessing the encryption circuitry and launching a variety of potential attacks.

High Quality Aluminum, Heat Dissipating Enclosure
The Aegis Padlock DT robust design has a solid aluminum enclosure which is ideal for whisking away heat from the rotating drive inside.