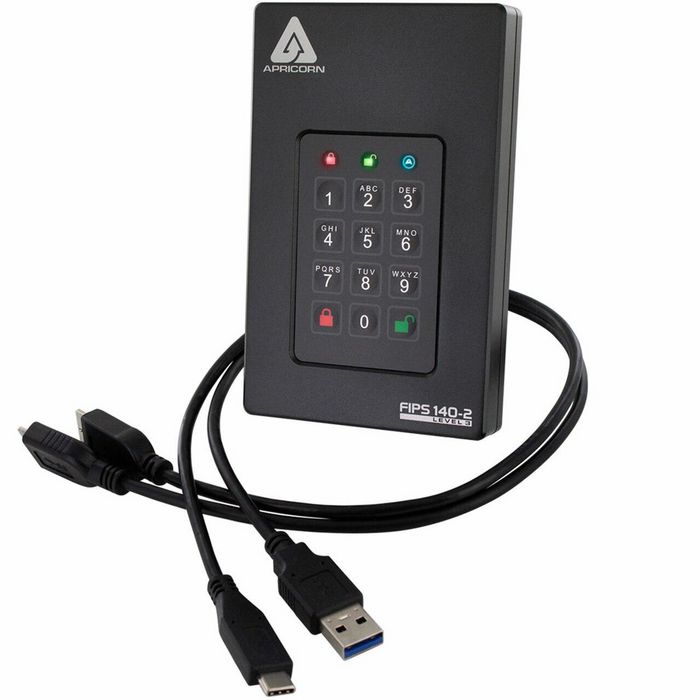 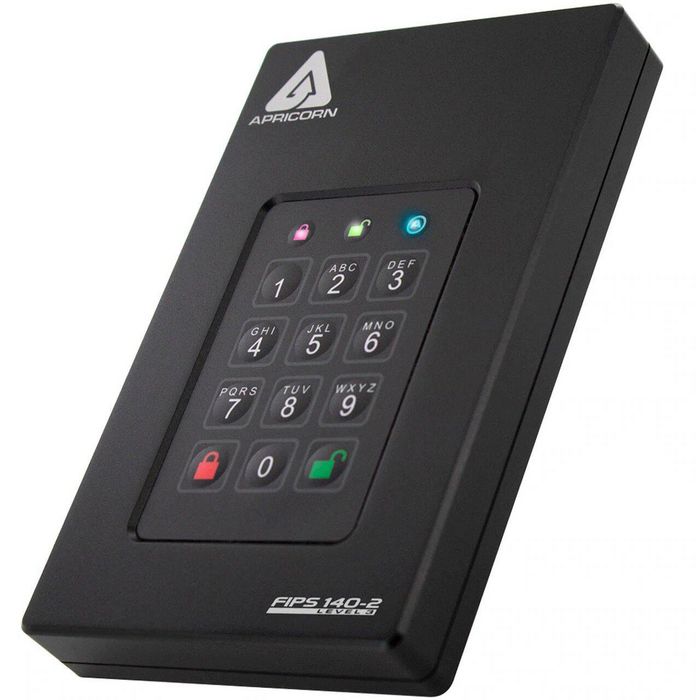 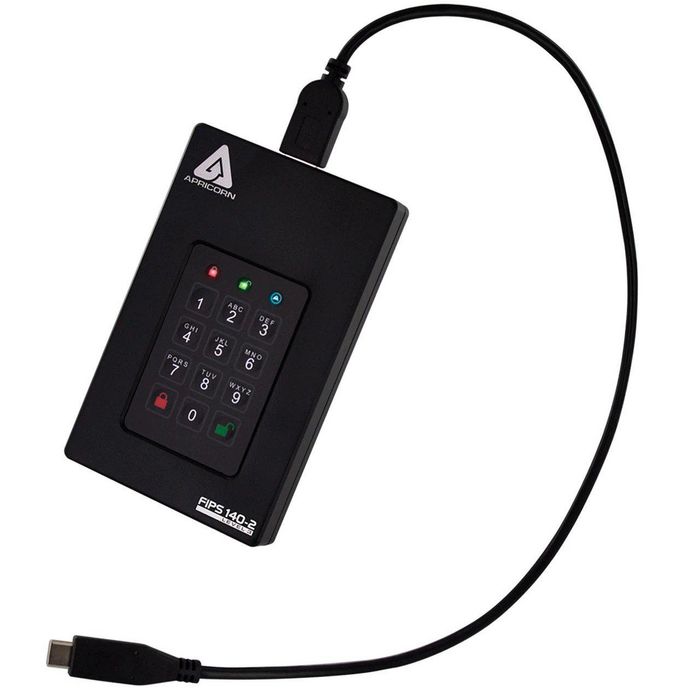 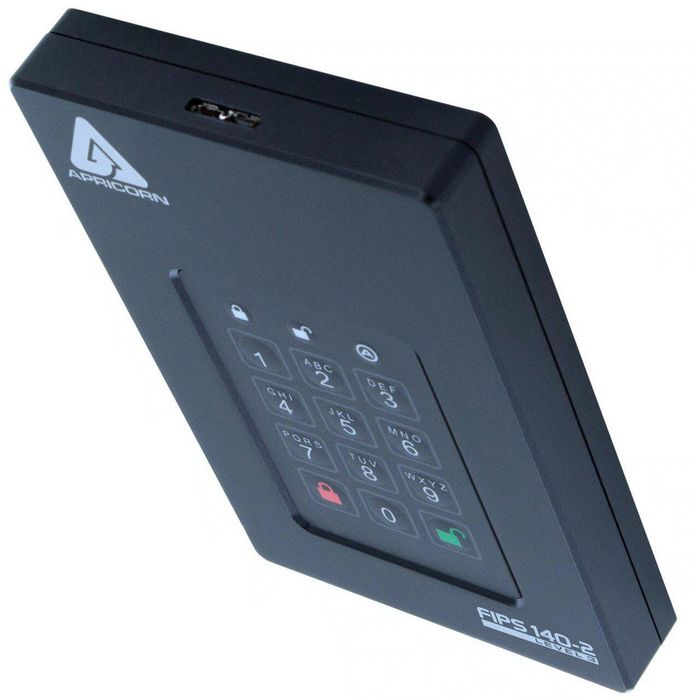 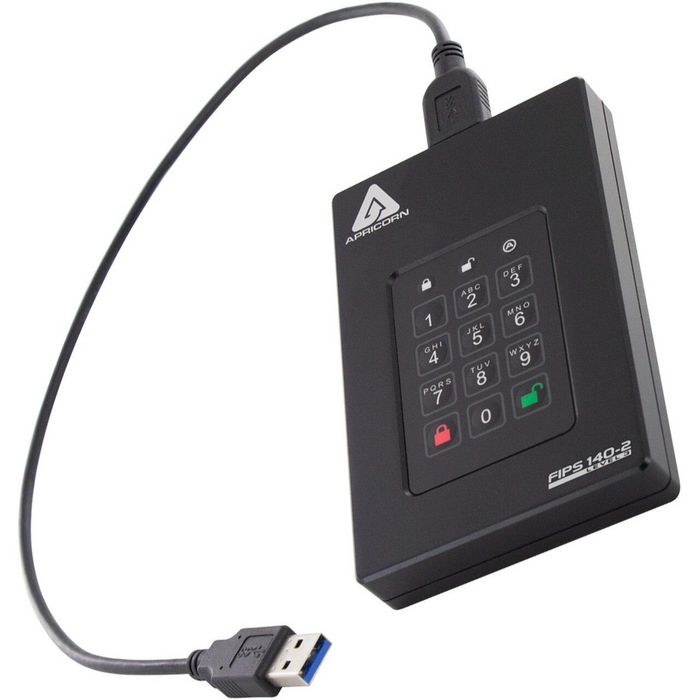 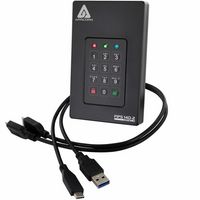 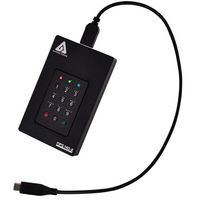 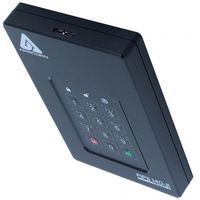 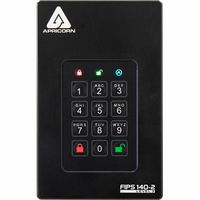 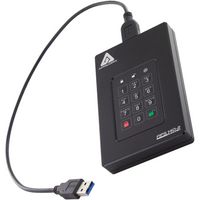 Our fastest, most secure, and most rugged 256-bit AES XTS encrypted USB external drive to date: Aegis Fortress L3
Delivering all of the same next level security features as our Aegis line of secure drives, in an extremely rugged enclosure, and with a new, ultra fast encryption chipset, the L3 is the fastest, most robust, highest capacity drive we've ever made. Tough on the outside, the Fortress L3 is designed to meet NIST's highest level of FIPS validation attainable for portable devic...

Our fastest, most secure, and most rugged 256-bit AES XTS encrypted USB external drive to date: Aegis Fortress L3
Delivering all of the same next level security features as our Aegis line of secure drives, in an extremely rugged enclosure, and with a new, ultra fast encryption chipset, the L3 is the fastest, most robust, highest capacity drive we've ever made. Tough on the outside, the Fortress L3 is designed to meet NIST's highest level of FIPS validation attainable for portable devices: 140-2 level 3. Small enough to go in a pocket or briefcase, large enough to carry up to 16TB of data, the Fortress L3 allows you to securely and easily carry large amounts of sensitive data everywhere you go. Available in a wide variety of storage capacities in both HDD and high speed SSD models. The Aegis Fortress is Software-Free, 100% hardware-based 256-bit AES XTS encrypted, and onboard keypad PIN authenticated with ultra-fast USB 3.1 (3.0) data transfer speeds. All Data is encrypted on the fly and all PINs and Data remain encrypted while the drive is at rest. Completely cross-platform compatible and OS agnostic; the Aegis Fortress thrives with Windows, Linux, Mac, Android, Symbian and Chrome. It also thrives where software-authenticated encrypted devices can't function, such as embedded systems and equipment in possession of a powered USB port and storage file system but no keyboard.

Featuring AegisWare
The heart and soul of every Apricorn Secure Device, AegisWare is our patent-protected firmware combined with the industry’s most advanced feature set.

FIPS 140-2 level 3 Validated
The highest level of FIPS validation granted by NIST The Fortress L3 expands the validation boundary beyond the encryption module, to include all of the electronics, the drive, the entire internal structure and the enclosure's fasteners. With this FIPS validation, the Fortress L3 more than meets the U.S. government standards for information technology and computer security. NIST FIPS 140 is the cryptography standard program required by the US federal government for protection of sensitive data.

Our Fastest Read / Write Speeds Yet
The Aegis Fortress L3's new chipset delivers SSD write speed increases of up to 150% and read speeds of up to 180% in comparison to previous Aegis Fortress models. There is also an appreciable performance increase in the HDD models too.

Aircraft Grade 6061 Aluminum Alloy Enclosure
Our toughest enclosure is milled from a solid block of aluminum alloy and sealed closed with tamper resistant / evident uni-directional breakaway security fasteners which are driven and cemented in place with hardened epoxy.

Separate Admin and User Mode
Admin (Device Configuration) Mode and User Access Mode. The Aegis Fortress L3 supports one independent Admin and one User PIN. The Admin mode controls the universal programmable settings of the device and can only be accessed with the Admin PIN. The User mode is limited to basic external drive functions like read /write, unlock / lock, etc. The data on the drive can also be accessed with the admin PIN in the User mode.

Data Recovery PINs
Creates State of User Forced Enrollment that Restores Access to Drive. In the event that a User PIN is forgotten, Recovery PINs can be programmed by the admin into the device at time of setup (and any time thereafter) to permit access to the drive’s data by creating a new state of User Forced Enrollment leaving the Admin PIN and the drive’s data intact. Once a replacement User PIN is generated, access to the drive is restored for the user and that new User PIN serves to replace the previous forgotten one.

Polymer-Coated Wear-Resistant Onboard membrane Type Keypad
Drive is Unlocked by Entering a PIN on Keypad and not the Host Computer’s Keyboard. Until the device is unlocked via its keypad, it remains invisible to the host. The embedded keypad circumvents all hardware and software key logging attempts to capture passwords by excluding the host system from the authentication process. Polymer-coated membrane-style keypad is wear-resistant to prevent revealing the drive's most commonly used buttons.

Two Read-Only Modes
Global, All Access Settings Controlled by Admin, and User Mode Controlling Individual Settings. Employed in situations that require the drive’s contents to be kept intact and unaltered for later examination. The two Read-Only modes are as follows: Universal Read Only is set by the admin from within the admin mode and can’t be modified or disabled by anyone but the admin. The second read-only mode can be set and disabled by a user but can also be enabled or disabled by the admin as well.

Programmable PIN Lengths
Admin Designates Minimum and Maximum PIN Lengths (between 7 and 16 Characters). The longer the PIN, the more secure the data on the device becomes. For example, the odds of brute force success go from 1/10,000,000 with a 7-digit PIN to 1/100,000,000 with an 8 digit PIN. In cases where the User sets up his or her own PIN from User Forced Enrollment, the Admin can set an enhanced User password length requirement as part of the overall security policy.

Brute-Force Defense
Select the Number of Consecutive Invalid PIN Attempts Permitted (4-20) Before Crypto-Erase. Unlocked (authenticated) by entering a PIN on their own onboard keypad. Since the PIN is not entered using the host computer’s keyboard, they are not vulnerable to software or hardware-based key-loggers or software-based brute force attacks. However, if the device comes under a physical brute force attack, your data is protected with a programmable “Brute Force Hack Defense Mechanism” which, if the programmed number (between 4 and 20) of consecutive incorrect password entries has been attempted, the device will delete its own encryption key and destroy the ability to decrypt its stored data.

Unattended Auto Lock
Programmable Length of Time of Inactivity Permitted Before Drive Locks Itself. All Aegis Secure Drives will automatically lock once disconnected from a computer’s USB port or the power to that USB port is interrupted, or after a pre-programmed period of inactivity.

Lock Override
Allows Drive to Remain Unlocked During USB Port Re Enumeration (Virtual Machine, Remote Boot). Designated for specific cases in which the drive needs to remain unlocked through USB port re-enumeration such as during reboot, or passing through a virtual machine.

Drive Reset Feature
All Apricorn Devices can be Reset and Redeployed Over and Over. Drive reset clears both the User and Admin PINs, destroys the data, creates a new randomly generated encryption key and allows the drive to be reused repeatedly, with an infinite number of randomly generated encryption keys, allowing the admn and or user to reset the drive as often as is needed.

Self-Destruct PIN
When Programmed and Activated, Performs a Crypto-Erase and Becomes New Access PIN. The last line of defense for data security when the device’s physical security is at risk. The Self-Destruct PIN defends against these physically compromising situations by erasing the drive’s contents, leaving it in normal working order appearing yet to be deployed.